What an amazing week this has been for me.  I am so thankful to be alive and to have this diary of all of the great people I have met throughout my life. Yesterday I got to personally hand former END_OF_DOCUMENT_TOKEN_TO_BE_REPLACED 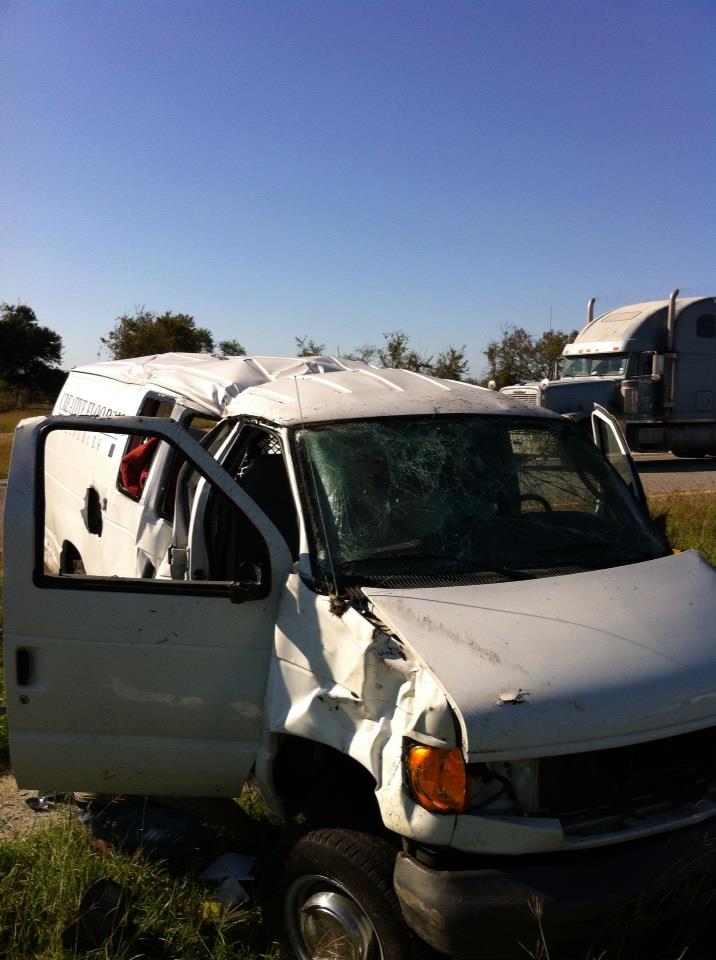 On the way to Houston yesterday (so my father could have a specialist look at him) we saw a van on the freeway roll three times towards us.  For a second we thought it was going to roll right into us head on going 70 miles per hour.  Thankfully a number of things happened to protect us and the drivers of the van.  Apparently they had a rear tire blow out causing them to lose control and catch the soft dirt, which began the roll.  The wires that separated the freeway traffic did their job and stopped them from rolling into oncoming traffic.  We were the first on the scene, bolting across the freeway to make sure they were safe.  Both drivers were miraculously unscathed but were shaken up quite a bit, in fact, the driver asked “did we roll?”  I said “yes, three times.”  He was shocked and his hands were shaking violently.  In fact, he couldn’t even dial the phone because of how bad his hands were shaking.  He kept repeating “Gracias a Dios.”  He was thanking the Lord for protecting him and his passenger friend.

Seeing this was another reminder to me that life is fleeting, and can be taken away at a moments notice.  It had me wondering what kind of legacy I would leave if I was to be gone today.  I have to disclose to you, I am happy with all that I have done in my life, but there is so much more that I want to accomplish.  Not only for myself, but for the world.  I want to leave something that people can grow with and use to improve their lives.  Look out future, I have some great things in the works!

I had the pleasure of meeting Don Varney several months ago at a networking event he coordinates here in San Antonio.  I have seen the invitations to these events but never made the time to go to one, but fate END_OF_DOCUMENT_TOKEN_TO_BE_REPLACED

Things do happen for a reason.  In this installment of Project Positivity we’re at week #42 and my recipient Anna Lisa happens to be 42 years old!  It’s ok, she gave me permission to mention that.  I met Anna Lisa END_OF_DOCUMENT_TOKEN_TO_BE_REPLACED

Again, time got away from me and this post is a bit late.  I got the honor of sitting down with Ruben Soto, an accomplished writer and is someone that does a lot for the community, in particular the latin END_OF_DOCUMENT_TOKEN_TO_BE_REPLACED

This week I met a man that very likely delivers more positivity to the world than anyone I’ve bet thus far.  His name is Dr. James Gordon.  Dr. Gordon is the Founder and Director of The Center for Mind-Body Medicine, END_OF_DOCUMENT_TOKEN_TO_BE_REPLACED